–
Which Faction Do You Choose?

Tensions are high among the organizations of the Republic. The Naboo, a normally peaceful people, have an uneasy truce with the aquatic inhabitants of their planet: the Gungans. The once-good diplomats of the Galactic Senate are being corrupted and toyed with by a mysterious puppet-master. These tensions could resolve themselves in time – if it weren’t for a sudden and unexpected move by the Trade Federation: invasion!

The lines have been drawn for the five factions of the invasion. The lithe Naboo plan for guerrilla warfare. Politicians try to keep things under control from the haven of Coruscant as the Sith disorganize and disorient the forces of good from behind the scenes. The Trade Federation unleashes its waves of droids and massive warships to destroy all in its path. Caught in the middle, the Gungans just may be the deciding force in this war.

In the fifth expansion created by the Independent Development Committee (IDC), you will control the events of the Invasion of Naboo. Will you resist the invasion, fight for your freedom against the Trade Federation oppressors, or split the Galactic Senate in half with your plans for revenge? There is only one certainty: you will face new strategies and fight in whole new ways for victory!

Whether fighting on the front lines, debating in the Senate, or plotting from the shadows, the galaxy will rest on your shoulders! In this Invasion of Naboo, every supporter could tip the war for a faction: who do you support?

Invasion of Naboo is the fifteenth expansion for the Star Wars TCG and the fifth for the IDC. It features 180 new cards.

Based on units from Episode I: The Phantom Menace, this 180-card expansion introduces the following features: 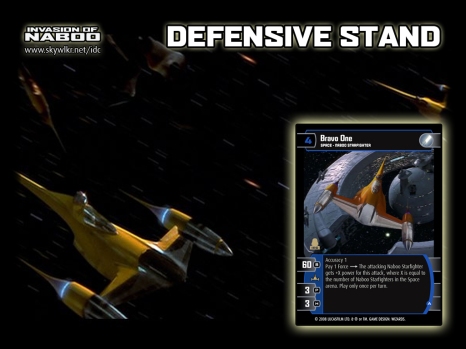