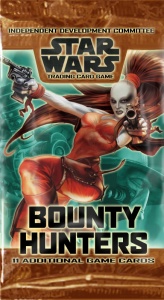 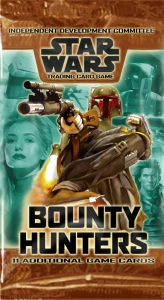 “Everyone dies. It’s the final and only lasting justice.” —Boba Fett

Both infamous and anonymous at the same time, Bounty Hunters are far more than mercenaries for hire. They’re heirs to a professional legacy, an ancient brotherhood with a glorious history. From the darkest corners of Coruscant to the furthest star systems from the Core, when there is a Bounty Hunter on the hunt there is nowhere to hide.

These are the laws of the Bounty Hunters Creed and in the seventh expansion from the Independent Development Committee (IDC) you’ll be able to post a bounty on your opponent and spend your credits on some of the galaxies best Bounty Hunters. So make the right choice and hire a Bounty Hunter. The Hunt is on and in Legacy of the Force: Bounty Hunters you get to decide who survives!